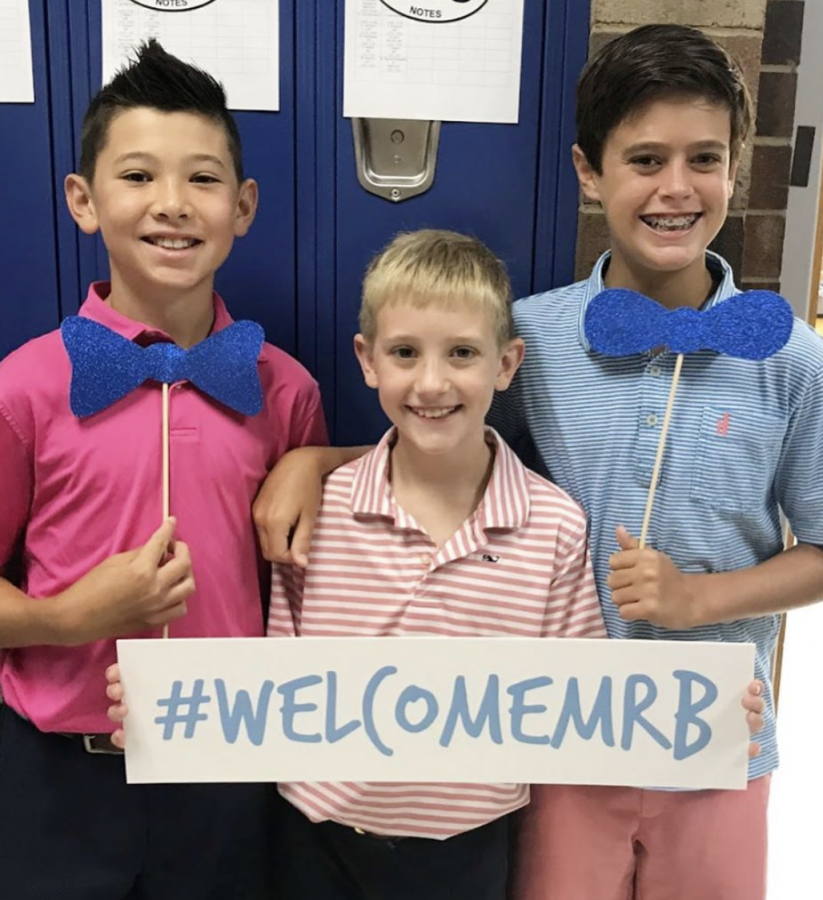 Middle School students welcome "Mr. B." on the first day of school. Props for everyone and hashtag #welcomemrb

It’s official: bow ties are the new fashion statement at Charlotte Latin School. On the first day of classes, even the Lower School Hawks were getting with the trend, proudly posing with bow ties on a stick. While only one man is responsible for this obsession with neckwear, he’s much more than just bow ties.

Mr. Charles “Chuck” Baldecchi recently joined our community in Charlotte from Lexington, Kentucky after fifteen years at The Lexington School. Adjusting to a new job and state can be scary—even for a headmaster. “The hardest thing is the number of new names. Including students, faculty and parents, that’s around 4,000 names. I’m used to knowing everyone’s name at my old school because I was there for so long,” Baldecchi said. But he has made himself a friendly face all around the Charlotte Latin campus. He can often be seen high-fiving the Lower School students as they get off the bus and greeting everyone with a smile.

Overall, Baldecchi noted his family’s move to North Carolina has been positive. One way the Baldecchis have made Charlotte more like home was to explore some of the area eateries, and they have already identified a favorite. “I would say our favorite restaurant is Sundries on Providence Road, mainly because we love wings as a family, and I think they have really good buffalo wings. It’s also very convenient to our house,” Baldecchi said.

Having lived in various places throughout his life, Baldecchi explained they have all influenced how he has lived his life. However, one of them has had special meaning for him. “I’d say that the most consistent is the place we live at in the summer called Sherwood Forest, Maryland, because it not only shaped me as a kid (and I have great memories), it still shapes me today. This is because we spend our summers there and it has become as special to my kids as it was to me, and it’s neat to share my experiences with them,” Baldecchi said.

Although the concept of philosophy often seems like a lofty discipline to many people, Baldecchi considers himself a lifelong learner of the subject. “From the outside, philosophy is seen as a very intellectual endeavor, but in truth, I really think it shows how simple, in some ways, life really should be and people make it very complex,” Baldecchi said. He affirmed this interest when he answered that the person with whom he would most like to spend time (dead or alive) would be, “Socrates, although it sounds very academic.”

Another of Baldecchi’s favorite hobbies is sailing. Baldecchi acknowledged the many life lessons he learned on the water, such as “patience,” and the values the sport has taught him. “Because the wind doesn’t blow and you have to do what you can to get going…when it’s very windy it’s hard to control,” Baldecchi said. “I think that it’s taught me that even during something I’m so comfortable doing as sailing, under given circumstances, you realize how powerful Mother Nature is and in a few moments, you can go from controlling Mother Nature Mother Nature controlling you and showing her dominance.” Although situations like this in sailing are intimidating, Baldecchi still loves sailing because of it.

Outside of sailing and philosophy, Baldecchi is an avid sports fan. Since he’s lived in many places across the East Coast, he’s had a range of teams to root for. Baldecchi grew up being a North Carolina State University fan because his brothers and father went there. “You can’t live in Lexington, Kentucky and not be a Kentucky Wildcats fan. So, certainly for the last fifteen years, that was and continues to be a strong team for me,” Baldecchi said, who was also raised cheering for Baltimore teams such as the Colts, Orioles and Ravens.

Before moving into an administrative role, Baldecchi was an English teacher; consequently, he considers himself an avid reader. “My favorite book is F. Scott Fitzgerald’s ‘The Great Gatsby.’ I’d say another book I really love is Ernest Hemingway’s ‘For Whom the Bell Tolls.’” Baldecchi also enjoys poetry. “Shakespeare of course, I really enjoy his sonnets.” Another book Baldecchi reveres is ‘Meno’ by Plato. “It has had the biggest effect on me.”

Since he has been both a teacher and a headmaster, Baldecchi is often asked for one piece of advice he feels would help students in their current lives and as they move forward into their futures.

Clearly, as anyone who has ever met Baldecchi is aware, he is a very big fan of bow ties. Those bow ties-on-a-stick were a big hit as a welcome to campus on the first day of school. But very few people know why he likes them so much. “When I was young and working, I didn’t necessarily always wear bow ties. But I realized I have a square face, and a bow tie worked with it. When I teach a long tie gets in the way and a bow tie doesn’t. Then it just became my signature. But I don’t really have a specific bow tie that’s my favorite. I do have a place in Manhattan called Seigo. Seigo is a Japanese tie maker who takes kimono fabric and makes ties. I really like any tie from Seigo,” Baldecchi said.

Although bow ties may be what helps to make him so iconic, he isn’t just bow ties. He’s a father of three children, a student of philosophy, an enthusiastic sports fan and a sailor. He’s our new leader at Charlotte Latin School.