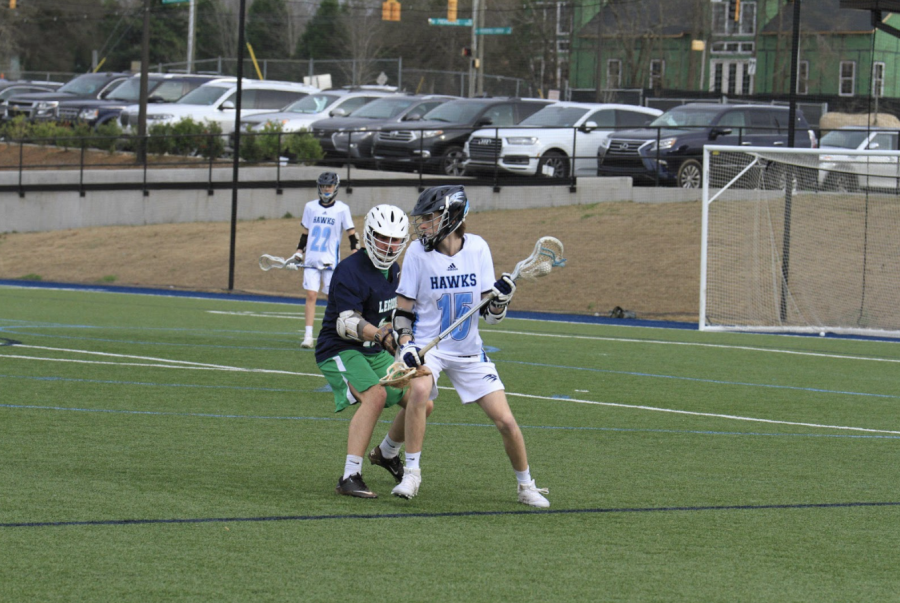 Wilkes Dolan ‘22 prepares to dust the Legion Collegiate defender that has foolishly challenged him to a 1 on 1. PC: St. Johns Photography, 2020.

A year ago, who would have considered a reality that included high school sports without fans in the stands cheering on the athletes, social gatherings limited to small numbers of attendees and Charlotte Latin School classes that reflected only half of the students on campus on alternating days of the week? Any one of these scenarios would seem like a horrible change for the school year, but they have become the new normal due to the safety protocols that allow Latin to keep any students on campus rather than operate on a fully-remote status. Many athletes are just grateful to have any season at all, while others are focused only on the fact that they miss their peers and fans supporting them in the stands. For seniors, this dilemma raises more questions: Will I even experience my senior season? How will the social aspects of sports change this year?

Before the pandemic, Riley Haynie ’21 would have spent the summer before school began engaged in an intensive conditioning soccer camp at Latin. Haynie would have spent 30 hours running sprints, practicing drills with teammates and simulating game situations in preparation for the season. As part of his experience before the season, he would have bunked with his teammates at camp, engaged in team building activities, and most importantly, bonding with other players. However, this summer, Haynie instead learned how to play poker, watched a lot of Netflix and YouTube and grinded on the Xbox sticks. When not engaged in these activities, Haynie tried to prepare independently for the upcoming (and highly anticipated) spring soccer season by practicing his technical skills in his front yard. Haynie believes that the soccer season so far has been decent, although it is certainly not the same as it was last season. So if that is any indication of the future, he thinks they can expect a very different experience this year. “It’s definitely a disappointment not to be having a full season and with so many restrictions and stipulations for playing, but it’s better than nothing, in my opinion. I am just glad to be able to play my senior soccer season,” Haynie said.

Andrew Cowan ‘21 lived in the weight room during the summer break, working out and lifting a lot. Similar to Haynie, Cowan would have spent most of the break playing soccer with teammates and conditioning. Instead, Cowan finished up his Eagle Scout project, which was refurbishing a garden at a rehab center. Cowan also learned how to play piano and can make his favorite group, Zac Brown Band, proud with his newfound prowess on the instrument. This is definitely not how Cowan imagined his senior season playing out, and he now finds himself pretty bummed out thanks to the coronavirus. “I am extremely thankful that we can still play soccer. It makes all the difference in the world to have that social aspect and be a part of the team still,” Cowan said. Cowan does not think that the season will stay the same and that it will either get better or get worse. As of right now the school is on an upward trend, which is reassuring to everyone.

The North Carolina Independent Schools Athletic Association (NCISAA) will begin its 2020 fall sports season without allowing fans or spectators at games due to the ongoing COVID-19 pandemic. Everyone acknowledges the frustration inherent in Latin’s mandate to keep our community safe while striving to maintain the school’s presence in athletic competition this year. Spectators are as much a part of the sporting experience as the game itself, so the athletes can have trouble recognizing the many levels of responsibility beyond the students’ scope of understanding. Questioning the mandate of no spectators at any athletic events, Haynie wonders why spectators couldn’t simply social distance. “I don’t understand why spectators couldn’t simply social distance as we do all day on campus,” Haynie said. When asked what he would miss most about the soccer season, Haynie replied that he would miss the meals with the team the most. “It was just a time where the team could hang out and everything about school or soccer would go away,” Haynie said. Similar to Haynie, Cowan is disappointed with the lack of spectators, but he understands that they have prioritized safety.  “Still, the atmosphere will 100% not be the same,” Cowan said.

Connor Little ‘23 runs track and field during the spring season. Their season started in late winter when coaches held optional practices for extremely dedicated athletes, like Little, to prepare for the demanding season ahead. The whole team showed up for the preliminary spring practice, and everything was looking good. Following the first two meets, though, things took a turn for the worse when coaches Mike Weiss and Sintayehu Taye informed the athletes that the season was over. Since Little was looking forward to the highly-anticipated track season, he was very disappointed. Affirming that the team is pumped for this year of running, Little maintains an optimistic perspective. “It’s only a minor setback for a major comeback,” Little said. Although he has high expectations for the fall season, Little has observed that cross country has been noticeably more difficult this year. “Social distancing has some challenges, and some days I cannot find a ride to practice, but it is good to just get everyone running and we hope to have a few meets this year,” Little said.

Track coach Mike Weiss instructs the distance and mid-distance runners in the spring. During the quarantine he used an app called Strava in which runners and cyclists can automatically upload their workouts to be shared with their followers. Searching for a way to keep track of progress and allow individuals to still interact with each other, Weiss created a Strava club called “Hawks Fly Together.” “It was really positive, and it turned into a great springboard for some athletes to make huge improvements between the abrupt end of track season and the start of cross-country,” Weiss said. The fall for cross country athletes has been different and challenging with the restrictions. “We have very few cross-country meets scheduled; we can’t travel like we normally do, and it’s just not the same,” Weiss said. The athletes who stayed positive and kept training made great strides towards a productive season and gained respect from teammates and for the sport. “The attitude has been really positive, and we’ve seen some good early race results,” Weiss said.

Varsity lacrosse player Wilkes Dolan ‘22 would have spent the summer break hanging out with friends and practicing lacrosse, but thanks to COVID-19, his lax time was cut short and he filled his time with other interests. Dolan also picked up a guitar over the summer. “I spent hours over the break learning how to strum it out on my axe,” Dolan said. Last spring, Latin varsity lacrosse started off on fire, winning games against Legion Collegiate and Catawba Ridge 15-1 and 13-2, respectively. However, after the SouthLake Christian and Durham Academy games, the pandemic struck; they were unable to play against Montgomery Bell Academy and Providence Day, which would have been extremely competitive contests. Dolan still hits the wall every now and then with the hope of a spring season. Feeling optimistic  by the recent success of the hybrid learning format and Latin’s ability thus far to keep students on campus, Dolan believes that the Latin community has a grip on the virus and that the future looks promising. Consequently, Latin may be able to keep sports going, even if they take place in a limited format. “The coronavirus completely shut down school and sports in the spring because no one knew what to expect from it, unlike now,” Dolan said. Like many of his peers, Dolan does not like the fact that there are no spectators at athletic events. “There needs to be spectators; the only reason that people play high school sports is to have their friends come and watch,” Dolan said.

Although high school sports are where students can pursue athletics, pick up new interests, or stay in shape, it symbolizes much more than just an after school activity. From eating meals with teammates to long bus rides for away games, sports enable students of all backgrounds and abilities to experience the camaraderie and social aspects that all teams possess, while developing work habits and self-discipline skills.