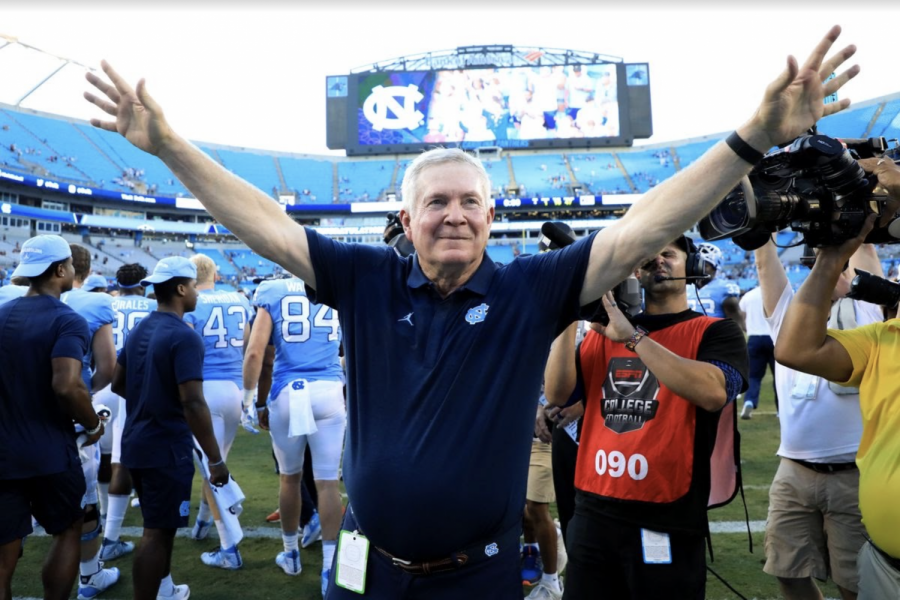 The University of North Carolina at Chapel Hill: a university with fans located all over the world. Known as UNC or the Tar Heels, the university is one of the top academic institutions in the US and also has outstanding athletics. Winning 45 national championships in various sports, the Heels have been one of the top teams since its founding. Although the school has experienced much success throughout its history, it has also endured significant struggle, as well.

As a huge Tar Heel fan, I have followed the university closely during my teenage years. My mom attended the University and grew up in the town of Chapel Hill. She has been a die hard fan all of her life, and that is how I was raised. I always watched every game I could and dreamt of becoming a Tar Heel myself. Whether it be to play sports or just for academics, it is a major goal in my life.

As a prestigious school, there are always eyes on it looking for a flaw to stain the image of the university. In 2014, the NCAA found something that would change the way outsiders see the school. The department chair of the African American studies program, Julius Nyang’oro, committed fraudulent acts such as teaching fake “paper classes.” According to Sara Ganim and Devon Sayers, to receive an A in these classes all you had to do was submit a “paper”. The paper was supposed to be very long and detailed but it turned out the athletes and other students were getting A’s for about a paragraph of writing that an elementary school kid could do.

However, Nyang’oro wasn’t the instigator of the paper class scandal at Chapel Hill; he simply went along with it. His assistant, Debbie Crowder, actually came up with the idea of these paper classes because she sympathized with the athletes and other students who were not “the best and the brightest.”

“[Nyang’oro and other] counselors saw the paper classes and the artificially high grades they yielded as key to helping some student-athletes remain eligible,” Kenneth Wainstein wrote in his CNN report on the events of the academic fraud. Professors committed academic fraud for 18 years; it was a huge disappointment not only to me but to Tar Heel fans everywhere. Individuals outside of the university (including rival schools) publically belittled the university, and its athletic status came into question.

By 2018 many people had already forgotten the scandal. Some sources say it wasn’t as major as others had originally thought. However, this history did stain the athletic program and on the football field, the Tar Heels struggled heavily. Under Larry Fedora, the team from Chapel Hill went 2-9, disappointing their fan base, leaving the fans hanging. There was little hope for the program until a historic leadership change provided an opportunity for the university to rebound.

On November 27, 2018, Mack Brown was named the head coach of the Tar Heel football team. He was a prominent coach who had previously coached at UNC- Chapel Hill, Appalachian State, Tulane and Texas where he won a national championship in 2005. The university thrived when Brown had previously coached there and everyone seemed ecstatic about his return. He proved to be a great recruiter, promising to turn the program around.

The following season, the Heels went 7-6. Every loss only came from a one score deficit. When they only lost by one to Clemson (the top team in the country), the fans felt really encouraged by the growth in the program.

The season has now wrapped up and the Heels finished 8-4, losing to Texas A&M in Carolina’s biggest game in school history, the Orange Bowl. The Orange Bowl is the game played by the top remaining ACC and SEC teams that were not ranked nationally in the top four. Texas A&M (the Aggies) were ranked number five in the country, controversially missing out on the college football playoff. Many people thought that the Aggies deserved to be ranked number four over Notre Dame. But the College Football Playoff Committee stayed with their decision to leave Texas A&M out. They were an incredibly talented team, but the Heels felt prepared.

The Mack Brown-led Tar Heels were extremely confident until four of their best players (Dyami Brown, Michael Carter, Javonte Williams and Chazz Surratt) opted out, deciding instead to prepare for the NFL draft. Many people thought their choice was extremely selfish because they put their own desires first before the needs and success of the team. The players were worried about getting injured and wanted to ensure a NFL draft selection. Without Brown, Carter, Williams and Surratt, the Heels came up short in the game, losing 41-27.

Many fans (myself included) believed The Tar Heels would have been victorious if their star players had participated. Even though they lost, this performance showed true promise for the future. With a star-studded 2021 recruiting class and a great quarterback in Sam Howell, the Heels will be a scary team to face next year.

Through all of the controversy and worry, the Tar Heels from Chapel Hill, empowered by Coach Mack Brown, found a way to come out on top. At the time of the scandal many people wondered when or if the program would return to its original reputation. The athletic department should be very pleased with the performance of their teams so far during these challenging conditions of 2020, and the promising year of 2021. Overall, the University of North Carolina showed that with a great leader, anything is possible.