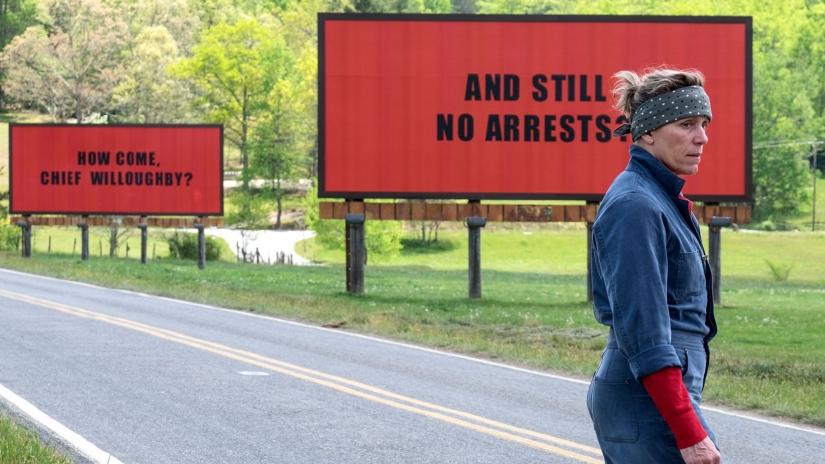 LILLY OMIRLY: So I finally ended up watching “Three Billboards Outside Ebbing, Missouri”. And I have a lot of thoughts. I don’t know about you, but that film was pretty jam-packed with a lot of stuff to analyze. Hence why we are here!

EG: I thought Frances was amazing. She’s definitely an Oscar contender. Her character was so complex and even though she made a lot of unethical choices, you feel empathetic for her.

LO: I think there was a great balance in her emotions because we were able to see into her mind, and how she was coping with this unimaginable loss. We see that she copes through the use of comedy as well as irrational decisions. And that’s very true to human nature, I think.

EG: She won the Golden Globe, and I thought she definitely deserved it. No complaints there.

LO: Yeah, I feel the same way. I also loved the character of Mr. Willoughby, played by Woody Harrelson, but I didn’t love the choice of actor. Don’t get me wrong – I don’t have anything against Mr. Harrelson, but I just think it was a bit difficult to take him seriously in this role. I also didn’t like the relationship between Abbie Cornish and Woody Harrelson, who play a married couple.

LO: Also, why was her accent not explained? I don’t know whether or not she was trying to act American – since the actress is Australian – or if she was just talking how she normally does. That was confusing, and added to the fact that I wasn’t convinced about their relationship.

EG: As for Sam Rockwell, who plays Jason Dixon – I thought he was great. I loved the character development, and his acting just felt so heartfelt.

LO: We followed him, and we hated him… the actor convinced us what he was good in the end. Which took a lot, given how much of a jerk he was at the beginning of the film.

EG: He won the Golden Globe for best supporting actor, but honestly, he wasn’t my top choice. Willem Dafoe in The Florida Project really wowed me more. But Sam Rockwell was still great, don’t get me wrong.

LO: I agree. Sam had to portray such a huge development for his character. It almost like a coming-of-age story… for an adult man. We see this child at the beginning of the film, who doesn’t know what he thinks besides absorbing his mother’s opinions. But then he’s able to have this turning point in his life, and follow something that he’s genuinely good at. Also, side tangent – this is about the character’s intention in one of the scenes. There was a bar scene, and Dixon is listening to the conversation of two men behind him. Dixon takes a shot of alcohol that is paralleled with the man behind him taking a sip of his beer. The camera then cuts back to a wide shot of the two, and as Dixon is sitting there listening in, he takes another shot. And there weren’t two glasses on the table. And so my initial thought – okay, continuity error, whatever. But then I was like – is this some detail into his character, and who he is as a person? Because he’s trying to play this role of a detective and go undercover, so was he caught up in this act in trying to play it to these people behind him? Or did everybody just forget about this and this is just some lame thing that somebody forgot to cut out?

EG: I like that a lot, man. I don’t think it was a mistake. Martin McDonagh knows what he’s doing, and he made of very specific choices throughout the film. I’m sure that was another conscious choice – that Jason Dixon pretended he was drinking while listening in. That’s such a subtle movement that gives so much insight into the scene and into his character. It’s like when writers write something very small, in between the lines. This was a very in-between-the-lines moment.

LO: I agree. I think the subtlety was something that I really enjoyed. And it’s something I’d love to talk to the director about, if I was given the chance.

EG: I always want to talk about Lucas Hedges briefly. He’s such a good actor in so many good movies – he played the son of Mildred Hayes. It was a small role, but I’m honestly so excited for his future.

LO: I think he did a great job.

LO: I mean, he was just great.

LO: His character was well-developed and able to expose another layer of Mildred Hayes’s character.

EG: He was a good character that moves the plot along. He brings out new elements that keeps the story rollin.

LO: And also, he was just funny. And in a film with such a dark topic, I think that the comedy was essential. And that’s very rare for me to say that, because I don’t like to use comedy as a cop-out.

LO: So basically, what we have here is the story of a grieving mother who seeks for closure.

EG: It’s just the way she seeks for closure is what’s so unique and intriguing, and what makes a great movie. Her daughter was raped and burned to death about seven months prior to where the film starts off. And Mildred Hayes, her son, and her ex-husband all deal with the loss differently.

LO: Mildred’s way of coping is to call the police out. Living in such a small town, she’s angry that there hasn’t any been progress with the case, or why there’s no suspects whatsoever. So she rents three huge billboards and displays messages calling out Chief Willoughby specifically, since he’s the head of the food chain, and she blames him the most. While they may seem insignificant, being on an old road that no one uses anymore, she knows the routes that different police officers take, and plans it so that these billboards are right in the face of the cops.

EG: Also, being such a small town, she knew how big of an impact these billboards would have, and that’s exactly what she wanted. She wanted a rise out of all the citizens in the town.

LO: Yeah, the film then on follows the repercussions of Mildred Hayes’s actions.

LO: I think first off, the opening sequence was great. It set the stage for the catalysts to happen, like foreshadowing what’s to come.

EG: It’s like… easing into the story a bit. It was gradual, but not slow. Sometimes movies start really abruptly, or too lethargic, but this felt perfect.

LO: There was also an ominous fogs over the billboards – this is before she displayed the message – which furthered the foretelling of what’s to come.

EG: I think in general, the cinematography was really good. There were a lot of great shots.

LO: It had a great balance of telephoto and wide lenses. You had those dramatic wide shots – the wide angle lens allowed for us to very clearly see everything. And in the more intimate scenes utilised the telephoto lens so they could shift focus among characters, and get us an even clearer position to see their juxtaposed emotions.

EG: Also, not to give spoilers or anything – I don’t think this really is one – but I loved the shots where the billboards were burning.

EG: Overall, good movie. Worth the money, worth a see, great acting. But did I think it should’ve won basically all the big Golden Globe awards? No, I don’t.

LO: Similar to “Lady Bird”, it wasn’t a film that I needed to think about very much. While I enjoyed it in the moment, the overall message that it left with me wasn’t something that surprised me.

EG: And not that it’s a bad thing, to leave the theater without a message, but… I don’t know, I just walked out and I didn’t care. I was definitely surprised that it was the favorite at the Golden Globes. Besides Frances McDormand winning Best Actress, I think other films deserved the other awards.

LO: I enjoyed it, but I don’t think it went above and beyond.

EG: I’ll give it a 7.5/10. Maybe I just grade higher than you, haha. Same for me, for me it didn’t go above and beyond. I thought it was an interesting idea and I liked it, but nothing crazy amazing.

Have you seen this movie? Let us know what you thought in the comments below!

This film was rated R for violence, language throughout, and some sexual references per the MPAA.