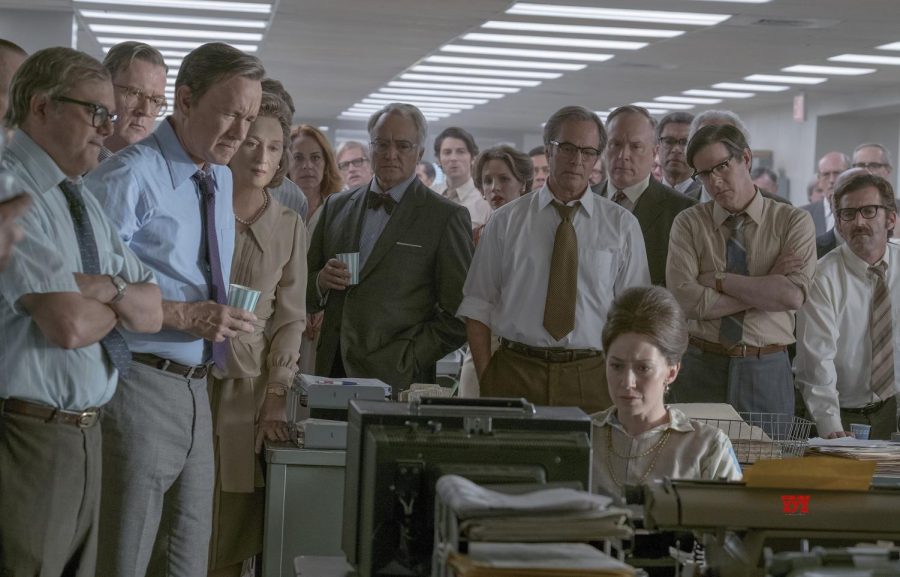 The newsroom of The Washington Post (all photos courtesy of 20th Century Fox).

Bailey Nemirow: I hated this movie.

Lilly Omirly: Overall, it was not worth watching. But I do think that there were some things – not very many – but some things I did enjoy.

EG: I definitely didn’t really like this movie. It’s nominated for Best Picture and Best Actress for Meryl Streep. I will say, before we get into this review, I do agree with the message of the movie. Freedom of the press is so important, and it’s relevant to today’s political climate. BUT, I do think this film was bland, and it’s preaching to the choir.

EG: Meryl Streep’s character, the owner of The Washington Post, is struggling throughout the movie to decide whether to illegally publish the papers or not.

LO: It had too many messages. It was trying to cater to the audience the importance of the press and that the government and politicians are awful, but also saying that women’s rights are important…and with films like this, you need to narrow down to one message that you want to convey. And the issue with this film is that they were relying too heavily on Meryl Streep’s decision…but historical films can’t do that. We all know what happens. This is history. For example, the film “All the President’s Men” is a movie that’s conveying the Watergate Scandal, which is something that everyone knows about. But it has this underlying theme of journalistic integrity that enhanced the story while also having one very specific purpose.

BN: I was just bored. They relied on the anticipation of the conclusion, and I was not anticipating anything. They constantly had so many moments that tried to be suspenseful.

EG: The suspense in the movie was ridiculous. It was so suspenseful so often about things that I wasn’t on the edge about. I can’t say how many little scenes went on where someone picked up the phone and their face dropped, or Tom Hanks stormed out of the room as the music swelled…there were so many little suspenseful jumps that it made the ending boring. The ending wasn’t suspenseful at all, and that was the most important part.

LO: I think that it was trying to dramatize these very bland parts of the film. Especially the times where Meryl Streep was going out and talking to people…I just had a hard time paying attention. I was focusing more so on the shots in sequencing, because I was so bored of what they were saying.

EG: So Meryl Streep and Tom Hanks played the two main characters. They’re both so incredibly talented and so good at what they do. That said, this wasn’t the movie for them. They were miscast, and the script gave them nothing to work with.

BN: I don’t think anyone could have done a very good job with the roles, but those two were miscast already, so it made the situation even worse.

LO: I was just disappointed. It was the script’s fault.

BN: This movie did not need to be made in the way they made it.

EG: And like I said earlier, it is relevant to today. I get why they made it – but the way they made it was very rushed, bland, and cardboard.

LO: Historical films are going through this theme where directors are dabbling in dull color palettes. I think that was nice…I think it was true to the style of films that are happening right now. Spielberg is always paying attention to the big things that people are doing right now. He looked to these other directors to see what they were doing.

BN: I just feel like it was very unoriginal of him, and he didn’t really push the envelope, which made a boring script and boring acting even more bland. I personally did not like the color palette. It felt like such a basic historical film, in a tan newspaper room…it didn’t do anything for me. Spielberg makes movies for the masses, and that’s fine, and he’s good at what he does, but I would’ve liked something interesting and new.

EG: I also didn’t like the color palette. The shots were fine, but it was just boring and too monochromatic to look at. Everything was tan and dull shades of blue…really, every single scene. It was tiring, and I was bored.

BN: I don’t think all historical movies need to rely on that hazy, dated color palette.

LO: I think that the point in making it feel dated is to establish the time. I love a good bright, exposed, catchy film, but I don’t think it would’ve worked for this. I’m not trying to really defend this movie, but I’m also trying to look at it from a different perspective. The color palette was similar to “Dunkirk” in the fact that it was so simple.

EG: I loved the color palette in “Dunkirk”. Because “Dunkirk” takes place by the ocean, it’s rainy, it’s grey, the naval ships are grey and dark, and everyone’s dying on the tan sand… it absolutely works. The color makes sense. But The Washington Post takes place in Washington D.C., in the big city, in the newsroom…I don’t know. I don’t think they needed that bland, old-school color palette.

BN: It made me feel like I’ve already seen the movie.

BN: I walked away from this movie feeling nothing and wishing I hadn’t seen it. It was a waste of my time and a waste of funding. Also, the last two minutes of the movie really made me mad. It was such a cheap way to end it.

LO: There was too much happening. It felt like this film was just an afterthought. Too many big people who have these big backgrounds and are famous all came together and mushed all their ideas into one big word-vomit, if that makes any sense. Spielberg will always have a warm place in my heart, and I don’t think less of him after watching this, and I still stand by many of his other films. If you’re on the fence about seeing this film, I say go for it and make your own opinion.

EG: I also walked out of the theater bored, tired, and emotionless. I wanted to care – and obviously, we’re all journalism students, we’re so passionate about the freedom of the press – but the film itself, as a cinematic piece of art, was not very good. The movie was preaching to the choir, I learned nothing, and I was excited when it started to wrap up at the end.

EG: To people reading this, I just gasped. Oof! That’s low. I just think I grade higher than you guys, but I feel the same way. I’m gonna give this a 4/10.

Have you seen this movie? Let us know what you thought in the comment below!

This film is rated PG-13 for language and brief war violence per the MPAA.